C.J. Prosise‘s career at Notre Dame is over. The Irish’s 1,000-yard rusher announced that he’s entering the NFL Draft, forgoing his final season of college eligibility to turn professional. Prosise has graduated, but did not see the field as a freshman defensive back.

Prosise made the announcement via social media Saturday afternoon, a day after the Irish lost in the Fiesta Bowl to Ohio State. 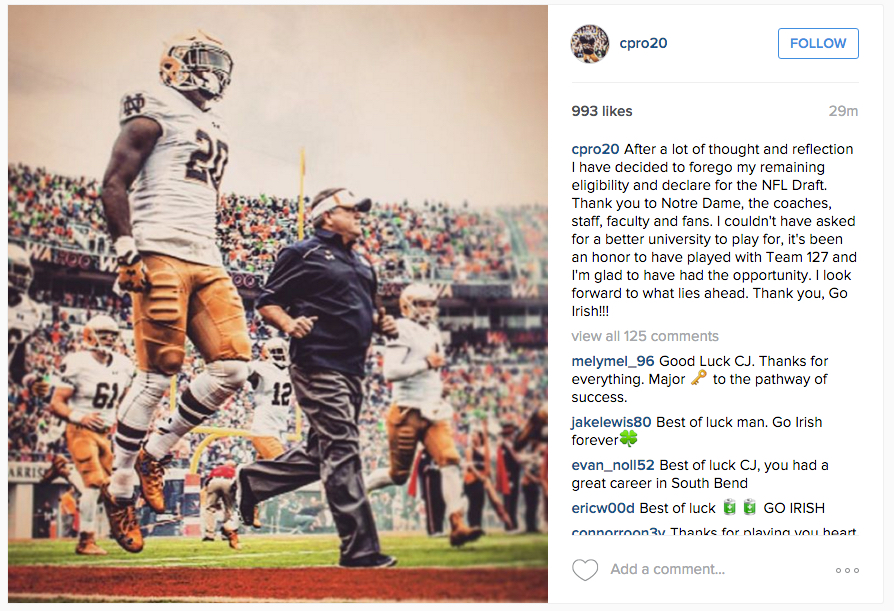 Prosise’s breakout season at running back earned him the team’s “Next Man In” award at the year-end banquet. He was the Irish’s first 1,000-yard rusher since Cierre Wood did it back in 2011, getting off to a fast start before injuries plagued him for much of the second half of the season. Prosise still managed to average 6.6 yards a carry, rushing for 11 touchdowns and catching another among his 26 receptions.

The Virginia native asked for a draft grade from the NFL’s advisory board, though he did not reveal what kind of feedback he received. He’ll likely need to perform well at the scouting combine in Indianapolis, displaying the rare blend of size and speed that made him one of the most explosive backs in the country when he was healthy.

Draft-eligble veterans Jaylon Smith, Will Fuller and KeiVarae Russell all plan on making a decision before the January 18th deadline. Russell said after the Fiesta Bowl that he planned on making an announcement in the near future.