If our first five members of the Top 25 were specialists or breakout candidates, our next five players are critical components. If Notre Dame is going to have a special season, it’s because these five players all lived up to expectations.

All five are expected starters. Four have already played key roles for the Irish, two as true freshmen. The last replaces a team captain, a veteran with high expectations from the staff and our panelists alike.

Five projected starters. All with sky-high expectations. The Top 25 is heating up. 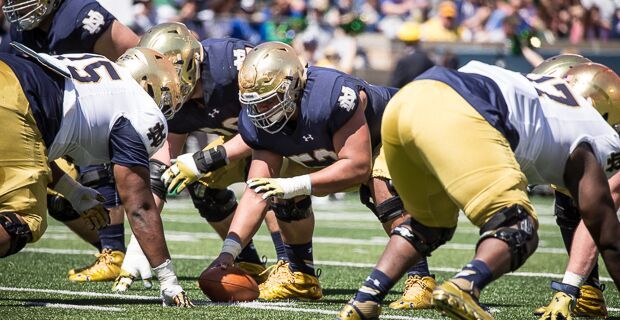 20. Sam Mustipher (Center, Junior): Replacing second-round draft pick Nick Martin, Mustipher earned praise from Brian Kelly and Harry Hiestand this spring, a hard-nosed grinder who comes from the old-school mold at center. Mustipher is powerful, athletic and at home in the trenches.

Strong enough to hold his own against nose guards and quick enough to get to the second level, Mustipher has already earned praise for his Football IQ and quick grasp of the position. He’s also lining up next to All-American candidate Quenton Nelson, who’ll certainly have his back as he breaks into the starting lineup. Mustipher has the chance to be a three-year starter at center.

Some think Mustipher is ready to step in and dominate. Five voters left him off the ballot all together. 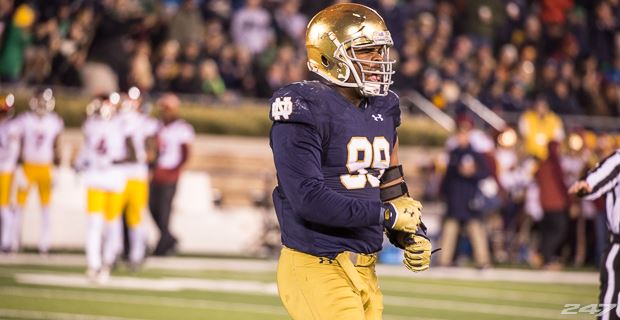 That Tillery held his own in the trenches was impressive. But he didn’t thrive, just 12 tackles in as many games on the season.

One of the only healthy bodies in the front seven as the Irish prepared for the Fiesta Bowl, Tillery got himself sent home from Scottsdale, a disappointing finish to an otherwise nice freshman season. Perhaps that’s why this group isn’t all that bullish on a player both teammates and staff acknowledge has elite physical traits and skills.

Capable of sliding into Sheldon Day’s job, let’s see if the lightbulb turns on for Tillery this fall, as the defensive line needs him to take a big leap forward as a sophomore. 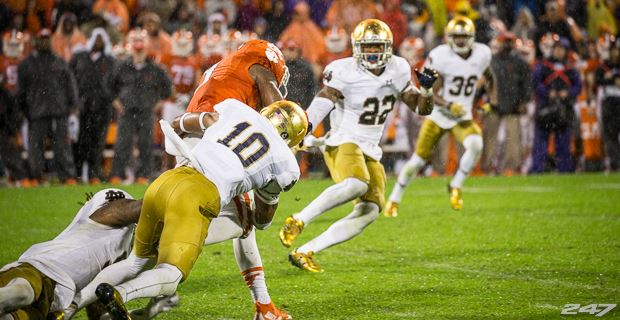 18. Max Redfield (Safety, Senior): Gifted with an NFL set of tools, all Max Redfield needs to do is prove he’s got the right toolbox. Last season was a step in the right direction for Redfield, though there was still too much inconsistency in his game.

Injuries played a part in that. Redfield ended up with a cast on his hand after playing well against Texas. He was held out against Georgia Tech’s option and pulled against Navy’s early after a missed assignment went for six points. Cap off the season with a bowl-week suspension against Ohio State and it was an underwhelming junior year for a safety some projected ready to breakout as an All-American.

True freshman Devin Studstill pushed Redfield this spring and will continue to do so during fall camp. That could be a motivational tactic or it could be a sign that the Irish staff is ready to turn the page. The former is more likely, as Redfield is a critical part of the plans for the Irish secondary. 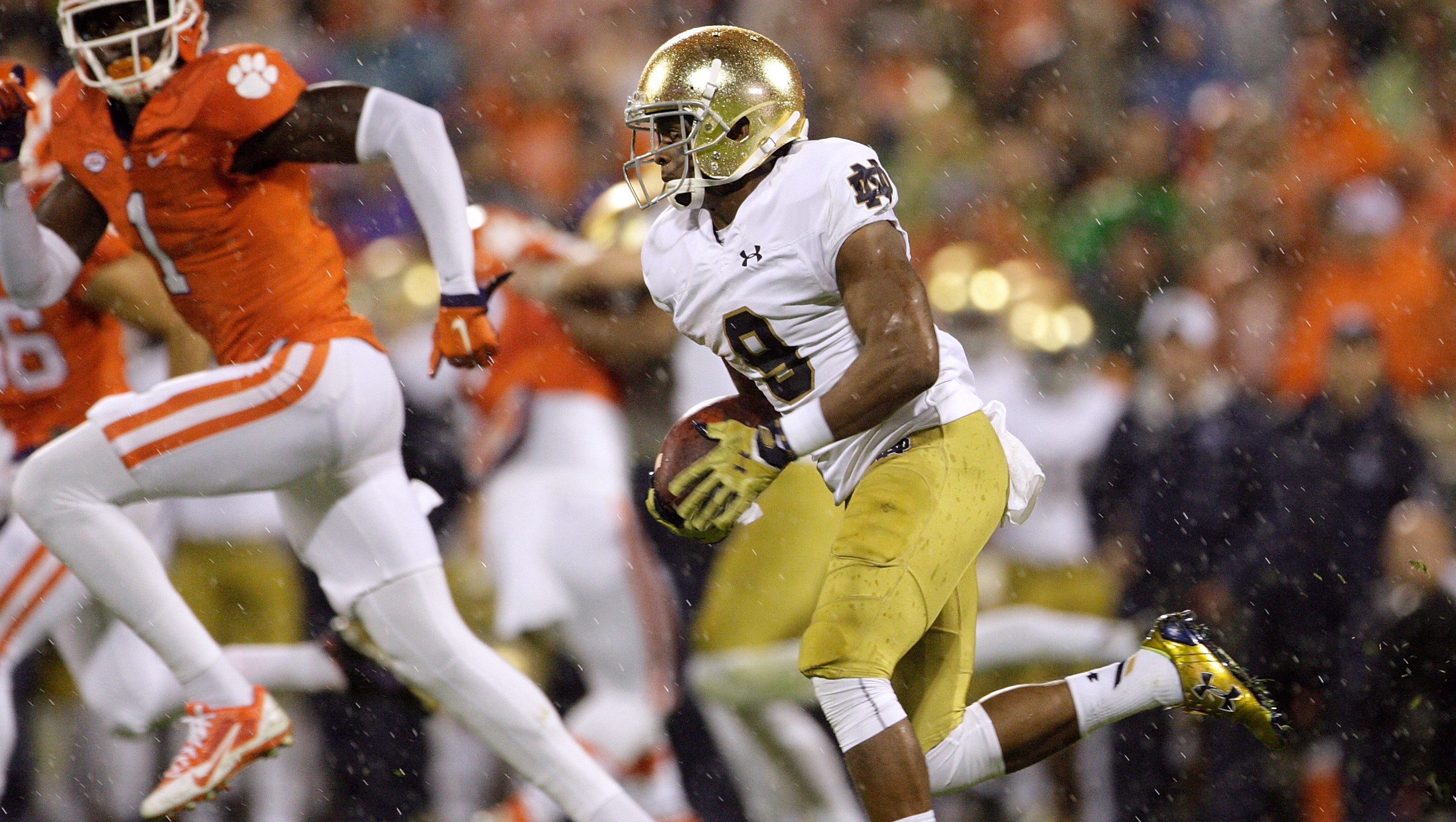 17. CJ Sanders (WR, Sophomore): Only the third player in Notre Dame history to return a punt and kickoff for a touchdown in the same season, Sanders is also the Irish’s best option at slot receiver—if he’s healthy.

Sanders missed the majority of spring practice with a hip injury, a significant recovery timeline that kept him rehabbing well into the summer. But the Irish staff was optimistic as Sanders recovered ahead of schedule, giving him a chance to enter fall camp with a green-light and ready to compete for more than just special teams work.

With elite speed and change of direction skills, Sanders will bring an added dimension to the offense while continuing as the team’s primary return man. But he’ll need to prove he’s healthy first. 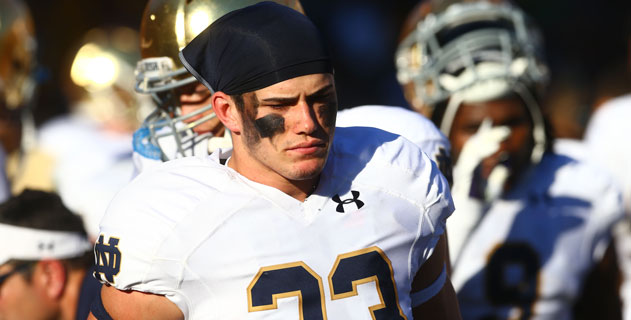 16. Drue Tranquill (Safety, Junior): Tranquill’s breakout game against Georgia Tech ended in misery as he tore his ACL celebrating a pass breakup just before halftime. It was his second major knee injury in a half-dozen games, tearing his other ACL against Louisville the previous November.

A workout warrior, Tranquill once again proved himself to be a recovery master. He was on the field participating in spring practice, two knee braces hardly holding up the jumbo-sized safety who is penciled into the starting lineup at strong safety as Elijah Shumate’s replacement.

A tackling machine who is at his best coming down into the box in run support, Tranquill is a key piece for Brian VanGorder. The versatile defender can play in multiple sub-packages and can blitz, cover and defend the run. He just needs to prove he can stay healthy.