The back half of Notre Dame’s schedule toughened its outlook over the weekend, suffering only one loss, and that came on the road against the No. 2 team in the country. Overall, Irish foes went 8-3 (not counting Notre Dame’s win at North Carolina) and are predicted to do so again this weekend, with Wake Forest joining the Irish in taking the week off.

Temple (3-3): The Owls may be buoyed by a 34-10 win at East Carolina, led by junior quarterback Logan Marchi’s 321 yards and two touchdowns, but the score is more a commentary on the Pirates’ defense than anything else. East Carolina ranks last in the country in yards allowed per game, making Marchi’s first career 300-yard game and Temple’s 523 total yards effects rather than causes.

Marchi did cut down on his turnover tendencies. After throwing seven interceptions over the past two weeks, he threw only one in the conference victory.

The Owls may make it two in a row, favored by 9.5 points against Connecticut this weekend (12 p.m. ET, ESPNews). A combined point total over/under of 62 hints at a 36-26 conclusion.

Georgia (6-0): The Bulldogs defense stifled Vanderbilt, holding the Commodores to 64 rushing yards while the Georgia rushing attack powered the offense with 423 yards en route to a 45-14 victory.

It will continue to be a breeze for the Bulldogs, now hosting Missouri (7:30 p.m. ET, SEC Network). Favored by a whopping 30.5 points, Georgia very well may prevail by more than a 43-13 margin.

Boston College (2-4): The Eagles continue to play the ACC’s elite close and physically, but they just cannot come out on top. Despite not turning over the ball and committing only five penalties, Boston College fell to Virginia Tech 23-10.

Another of the ACC’s best welcomes the Eagles this week, with Louisville favored by 21.5 points (12:20 p.m. ET, ACC Network). The over/under of 57 indicates an unorthodox score of 39-18. Frankly, Boston College has played everyone relatively close so far — there is no reason to think that stops now. 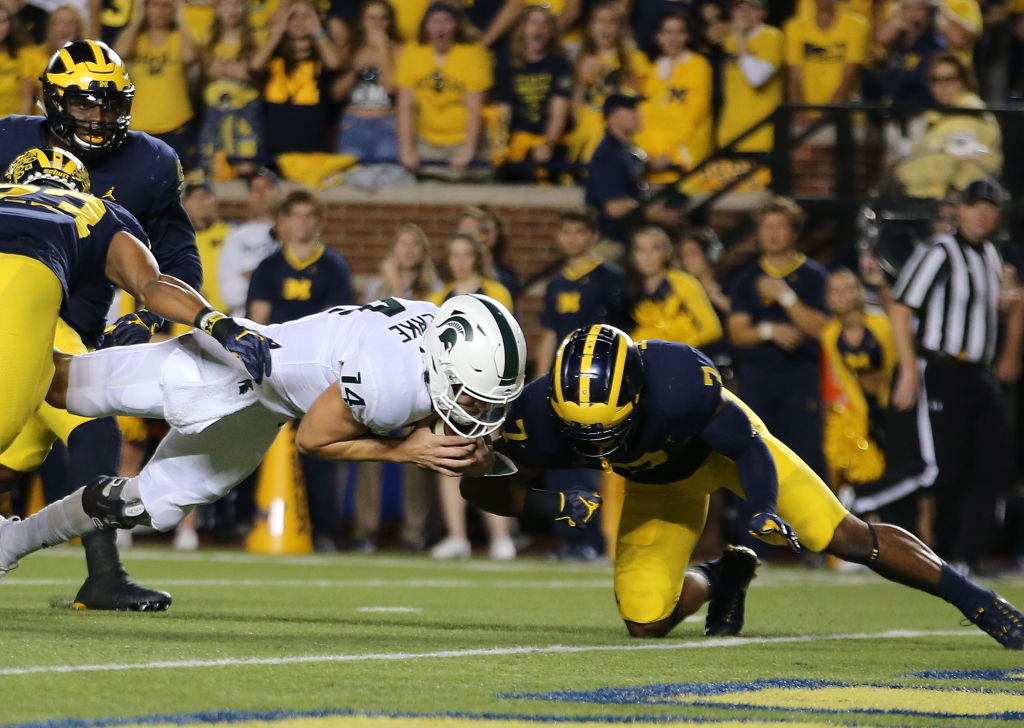 Michigan State (4-1): When Notre Dame routed the Spartans a few weeks ago, it looked like nothing more than an easy evening against a rebuilding opponent. Michigan State may have rewritten that narrative with its 14-10 victory at Michigan on Saturday.

The Spartans got out to a 14-3 lead at halftime, an important note as the second half was marred by a miserable rainstorm. Junior quarterback Brian Lewerke led Michigan State both through the air and on the ground, gaining 61 yards and a score on 15 carries.

The Spartans now head to Minnesota (8 p.m. ET, Big Ten Network) to risk their undefeated Big Ten record. A 4.5-point favorite in a likely low-scoring night, Michigan State should come out on the right side of a 22-18 theoretical final.

Miami (OH) (2-4): The RedHawks season took a turn for the worse this weekend. Bowling Green is a MAC doormat, yet Miami lost to them 37-29. The RedHawks looked poised to escape with a close win before fumbling on the plus seven-yard line with less than two minutes left. A Falcons defender picked up the loose ball, and 93 yards later it was an eight-point margin with only 1:21 left.

The season is not yet lost, though, and Miami can right the ship at Kent State (3:30 p.m. ET, ESPN3). Favored by 9.5 points, the RedHawks will undoubtedly be plenty motivated this weekend. Combining the over/under with the spread leads to a 26-17 final.

North Carolina (1-5): Notre Dame knocked the Tar Heels another step down a spiral staircase. The 33-10 Irish victory will likely be a larger margin of defeat than North Carolina experiences this weekend, but even a slim loss could be crippling for the Tar Heels. Hosting Virginia (3:30 p.m. ET, ACC Network) just may be their last best chance at another FBS-level victory this year.

Bookmakers do not expect them to manage that. North Carolina is a four-point home underdog against a lower-level ACC opponent. That should give a very clear idea of how far this season might sink. A 55.5-point over/under makes for a 30-25 ending.

This week will be much tougher on the Trojans. They host Utah (8 p.m. ET, ABC), likely the toughest competition for the Pac 12 South Division title. USC should not have too much trouble, favored by 13 points with a 54.5-point over/under, rounding to a 34-20 result.

North Carolina State (5-1): The Wolfpack has definitively arrived, topping Louisville 39-25 on Thursday to add a second victory over the ACC’s top teams, only awaiting a Nov. 4 matchup vs. Clemson.

North Carolina State gained 520 total yards and averaged 11.5 yards per pass attempt. For a team led by its defense, the offensive explosion was quite noticeable. Junior quarterback Ryan Finley led the way, completing 20-of-31 passes for 367 yards, connecting with three different receivers for at least 99 yards.

The momentum should continue at Pittsburgh (12 p.m. ET, ACC Network), where the Wolfpack is favored by a likely-too-slim 12 points with an over/under of 56. A 34-22 final sounds both too close and too generous for the Panthers.

Wake Forest (4-2): The Demon Deacons could not recover from going down 14-0 in the first quarter to Clemson, eventually falling behind 28-0 before closing the gap to 28-14. The Tigers clearly controlled the contest throughout, holding the time of possession edge 35:05 to 24:55 and rushing for 190 yards on a whopping 48 carries.

Miami (FL) (4-0): The good news: The Hurricanes beat Florida State 24-20 thanks to a 23-yard touchdown pass from junior quarterback Malik Rosier with only six seconds left.

The obvious news: This may be a down year for the Seminoles, somewhat devaluing the win.

The forward-looking news: Miami has only one genuine ACC challenge left, Nov. 4 vs. Virginia Tech, meaning an undefeated conference slate and a regular season as a whole are both distinct possibilities.

The bad news: The Hurricanes lost leading running back Mark Walton for the season due to an injury.

They will look to first adjust to Walton’s absence against Georgia Tech this weekend (3:30 p.m. ET, ABC). Favored by just less than a touchdown, Miami will need to handle the triple-option to come out ahead in a supposed 29-23 contest.

Navy (5-0): For the second consecutive week, the Midshipmen needed to come from behind to preserve their undefeated season. This time, that comeback took until there were 15 seconds left, when junior quarterback Zach Abey completed a 16-yard touchdown pass to push Navy past Air Force 48-45. Abey accounted for four total touchdowns in the back-and-forth affair.

This week the Midshipmen may not be so lucky, heading to Memphis as four-point underdogs (3:45 p.m. ET, ESPNU). The 76-point over/under implies another offensive afternoon, perhaps 40-36 in the Tigers’ favor.

Stanford (4-2): The Cardinal slipped past Utah 23-20 in a tough, one might even say gritty, game. Junior running back Bryce Love managed only 152 yards on 20 carries, but his fourth-quarter, 68-yard touchdown run provided the difference.

Stanford turned to two quarterbacks. Keller Chryst completed 7-of-14 passes for 106 yards while K.J. Costello went 6-of-10 for 82 yards.

Whoever takes the snaps against Oregon this weekend (11 p.m. ET, ESPN) will undoubtedly rely on Love to match a 10.5-point spread in the Cardinal’s favor. A 36-25 final may make for a low-scoring #Pac12AfterDark, but that catchphrase exists for a reason. Something is bound to keep it interesting.

Got questions? It’s bye week. Let’s try to answer them.
Later this week, this space intends to run a mailbag. If you have any questions for it, drop them into the comments below. They do not need to be litigated there — and they just might “disappear” if they are — but good ones will be noted and hopefully answered by week’s end.
[protected-iframe id="4322d87b3e2eb4d11caa19723fa3b36c-15933026-22035394" info="//platform.twitter.com/widgets.js" class="twitter-follow-button"]