Live
Upcoming Events
No Events at this time

With Notre Dame’s inevitable interest in the release of the first College Football Playoff selection committee poll tonight, conversation focuses on that and much else can be forgotten.

Quickly on that forgotten note, Irish coach Brian Kelly said all injuries, with one exception, from this weekend should be non-issues by the time Notre Dame takes the field against Wake Forest (3:30 p.m. ET, NBC). Junior tight end Alizé Mack’s availability will hinge on his progress in the concussion protocol. He will attempt a cardio workout today (Tuesday), usually a significant barometer in that process.

If Mack is unavailable against the Deacons, Kelly insisted the Irish offense will hardly miss a beat.

“[Freshman] Cole Kmet is ready to go. He’s chomping at the bit,” Kelly said Tuesday. “… [Senior] Nic Weishar’s role will activate, and [fifth-year] Durham Smythe is playing his best football of his career.

“… We feel good about what the next options are for us.”

As for the poll, released at 7 p.m. ET on ESPN, Kelly would not take the bait as to how high he thought Notre Dame should be ranked.

“It’s hard for me to judge the other teams,” he said. “I know Georgia is a really good team, and I know Notre Dame. So I’d have Georgia one, Notre Dame two, and then there’s no other teams.”

Wherever the Irish land, Kelly’s focus remains the same and he expects as much from his team. Carrying forward a theme from this past weekend, Notre Dame is not concerned with its record, only its performance.

“Winning is not even something that we think about,” Kelly said. “I’ve got to tell you, I’m honestly giving you the truth in this answer.

The Irish can focus on the dominating. That will not stop the poll from coming out tonight. Kelly’s mention of three more games after Wake Forest reinforces a valid point, though. Tonight’s poll is not the destination. Whether Notre Dame lands at Kelly’s No. 2, a more realistic No. 3 or a surprising but somewhat understandable No. 5, no one is awarded a Playoff spot because of the Halloween rankings.

Thus, any discussion of the poll and the contenders should include looks forward to what awaits each of those teams. At this point in the season, it makes more sense to break down the remaining contenders by conference to set the table for coming attrition. There is a discussion to be had about where the 7-1 Irish belong among 7-1 and defending national champion Clemson, 7-1 Oklahoma and 7-1 Ohio State. Those four teams will presumably make up Nos. 3-6 tonight.

Spending too much time on that discussion at this point misses two facts: It is highly unlikely all four finish the season with only one loss, reducing some of the consternation, and only the selection committee’s opinion actually matters.

For example, that latter reason is why Kelly no longer votes in the USA Today Coaches Poll.

“The committee, to me, made my vote obsolete in the sense that they could do such a better job of evaluating truly the top teams in the country,” he said. “I could get a cursory view of it and a look at it, but I couldn’t do the kind of job that the committee can do from 1 to 25.”

With that in mind, let’s take a look at the 12 remaining national title contenders, broken apart by overlapping futures more than claims to date. 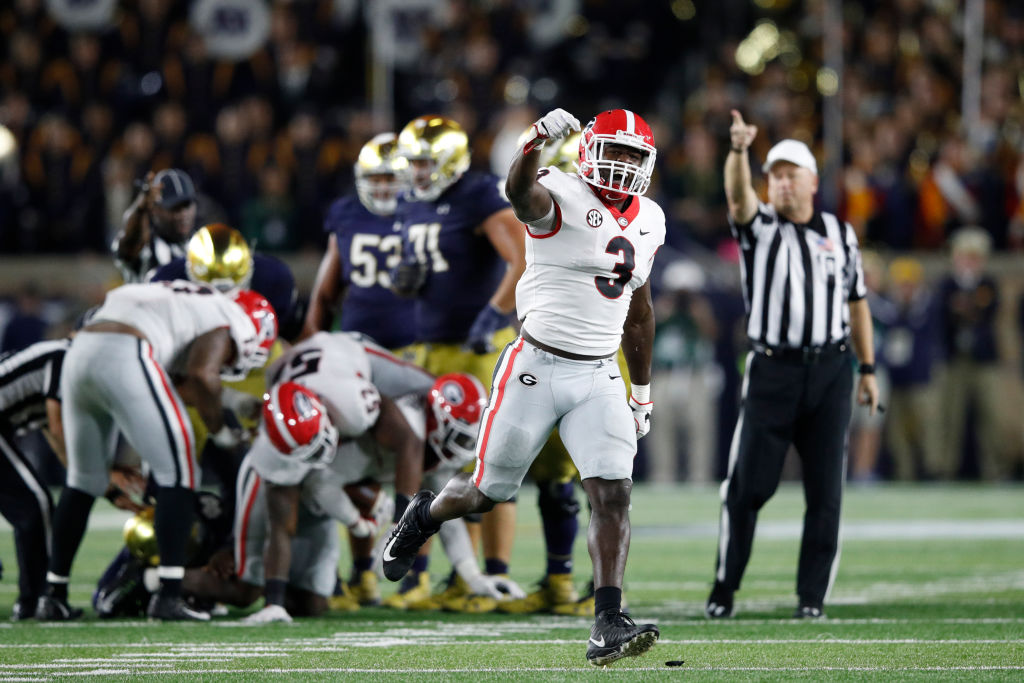 The Undefeated and Unquestioned, otherwise known as the SEC.
Neither Alabama nor Georgia has lost. Only the latter has faced a genuine test, its 20-19 victory at Notre Dame.

The order of these two does not matter. If one falls before the SEC title game — both still have to play Auburn — the blemished will fall from its perch. If both arrive to their 13th game with identical 12-0 records, the SEC champion will be guaranteed a Playoff entry. The competiveness of that game, not tonight’s ordering, will likely determine the other’s bowl destination.

The ACC 3: Miami, Virginia Tech and Clemson.
Miami earns top billing here simply because it remains undefeated. That will be tested this weekend against the Hokies and next weekend with Notre Dame visiting. If the Hurricanes win both of those and proceed to claim the ACC, they’ll make the Playoff. There is no need to complicate that.

Virginia Tech’s hopes would hinge on running the table — which includes a trip to Georgia Tech next weekend — and exacting revenge on Clemson in the ACC title game. If the Tigers do not make the ACC championship, the Hokies’ hopes probably dwindle, as well, unless national chaos reigns. This is college football, after all. Anarchy is always just a Saturday away.

Clemson’s loss at Syracuse is but a blip on the radar when compared to dominating wins at Louisville and at Virginia Tech, a victory over Auburn and a trip to North Carolina State this weekend. (And remember, starting quarterback Kelly Bryant missed much of that Orange defeat.) If the Tigers run the table, it is hard to imagine the selection committee would deny the reigning champions a chance to defend that title.

The Mess of the Big 12: Oklahoma, Oklahoma State and TCU.
Oklahoma has the only non-conference win of note among this trio, traveling to Ohio State and emerging with a 31-16 victory on Sept. 9. The Sooners’ loss to Iowa State looks better now that the Cyclones also knocked off TCU. Iowa State will get its chance at Oklahoma State on Nov. 11.

The Cyclones’ rise complicates the entire conference’s hopes. If Oklahoma can run the table, beginning at Oklahoma State this weekend, and perhaps get revenge on Iowa State in the Big 12 title game, a valid claim to a playoff spot would emerge. If not, with all other aspects of these résumés being equal due to the conference’s round-robin format, it is difficult to envision any one of the three pulling away enough to challenge Clemson or a Big Ten champion for a Playoff spot.

The Big Ten Dichotomy: Ohio State and Wisconsin.
Ohio State has a résumé and a loss. Wisconsin has neither. That’s why college football developed conference championship games, though. Where the Badgers land remains a superfluous note until they do or do not finish the season 13-0. A loss, any loss, will knock them from these conversations entirely.

The Buckeyes can now claim a win against Penn State to counterbalance their loss to Oklahoma, but other than that their claims are thin. A combination of a conference title and the eye test may be enough to give Ohio State a boost with just a bit of national aid.

The Pac One: Washington.
The Huskies likely need national chaos. Their non-conference schedule featured wins at Rutgers, vs. Montana and vs. Fresno State. That will not separate a 7-1 Washington from the other one-loss teams in the country. Winning the Pac-12 will not, either, as it appears to be a conference filled with good but no great teams.

Oh, and Notre Dame: Victories over three six-win teams set the Irish apart, and they will have the chance to grow that total to at least five, with both Miami (FL) and Stanford already holding such records. Obviously, as time passes, the metric will rise, but Notre Dame’s overall schedule will pass nearly any test put to it.

For context: Alabama’s only victory over a six-win opponent is Colorado State. Georgia has beaten both the Irish and Mississippi State, and Clemson claims two in Auburn and Virginia Tech.

A Voting Note
Some mention of the committee’s voting procedure should be included here. If Notre Dame lands at No. 3 tonight, that mechanism may deserve some of the credit. The Irish appear to be a pretty clear-cut top-four team at this point. Clemson, Oklahoma and Ohio State stack up well with each other — and, to an extent, with Notre Dame. One of them has to land at No. 6. As the committee votes, the odds are the Irish receive a combination of No. 3 and No. 4 votes. Those other three, meanwhile, will have ranges from No. 3 to No. 6.

That alone could elevate Notre Dame above them this week. As that trio becomes a duo and then possibly just one, all due to the nature of college football, the Irish hold on a Rose Bowl spot will become more tenuous.

It is this same thinking that makes it somewhat unlikely any of the Big 12’s hopes crack the top-four this week. Oklahoma, Oklahoma State and TCU will siphon support from each other, lowering their Halloween ceilings.

Let’s remember that holiday-turned-adjective. It is still October. All of this matters only so much.

A Prediction
Alabama, Georgia, Notre Dame and Clemson. That is who it should be, in this scribe’s opinion, too. For that matter, may the college football universe be only so lucky as to have the season end with that exact order. The dueling rematches in the semifinals would be storylines to make December fly by.

Virtual recruiting the only option for Notre Dame and everyone else March 27, 2020 6:00 am