KYLE HAMILTON
Marist High School; Atlanta.
Measurements: 6’3”, 185 lbs.
Accolades: Consensus four-star; All-American; No 8 safety in the country, per rivals.com, No. 9 prospect in Georgia and No. 97 overall.

Other Notable Offers: When Notre Dame offered Hamilton, he was something of a ho-hum three-star prospect. Other schools had noticed him, certainly, but there was not an all-out push for him just yet. His work on the camp circuit over the summer pushed him further and further up the recruiting rankings, forcing the likes of Georgia, Clemson and Ohio State to chase him, though to no avail.

Quick Take: The praise for Hamilton has become universal, with hardly a hole in his game aside from the slightness that comes from not having spent time in a collegiate strength and conditioning program. Hamilton also excelled at receiver in high school, using his basketball instincts to routinely high-point the ball. He will not play there at Notre Dame, but his ability to track down the ball should still show itself.

Short-Term Roster Outlook: Hamilton is the type of prospect that fans want to see break into the rotation from day one, but with Alohi Gilman and Jalen Elliott manning the position in 2019, snaps may be limited for Hamilton aside from special teams work.

Long-View Depth Chart Impact: Put Hamilton at the top of the list of the possible replacements of those two safeties in 2020. He will need to develop some consistency in coverage and perhaps broaden his shoulders a bit, but it is not hard to envision him starting as a sophomore.

Kyle Hamilton is a long safety with great speed to the ball.@Coach_TJoseph and the D-boyz are thrilled to welcome @kham316 to our Irish family.#GoIrish ☘️ #FightClub19 pic.twitter.com/fI3Xkx9F6n

Other Notable Offers: Ajavon’s recruitment picked up steam back in the days when notre Dame still lacked suitable safety play, so it was a big deal to have one of his caliber picking the Irish over the likes of Michigan and Clemson.

Quick Take: Ajavon will need to improve on his coverage skills, but that is somewhat typical of high school players accustomed to being the best athlete on the field in just about every game, and that seemed to be the case for Ajavon. He can already deliver a wallop, if nothing else.

Short-Term Roster Outlook: Notre Dame’s back line of defense has done a 180 since Ajavon’s initial recruitment, now returning two established starters in Alohi Gilman and Jalen Elliott. Thus, do not expect to see much of Ajavon on defense in 2019, though his playing style screams special teams ace.

Long-View Depth Chart Impact: Elliott will be out of eligibility after next season and Gilman very well may head to the NFL with eligibility remaining, putting Ajavon in the mix for those two starters’ spots along with a few other highly-recruited underclassmen.

Lacing up his gloves and entering the ring for the Fighting Irish is @litch_ajavon.

The Virginia native comes with a grit and demeanor that Coach Joseph loves.#GoIrish ☘️ #FightClub19 pic.twitter.com/ARVdEtZjRe 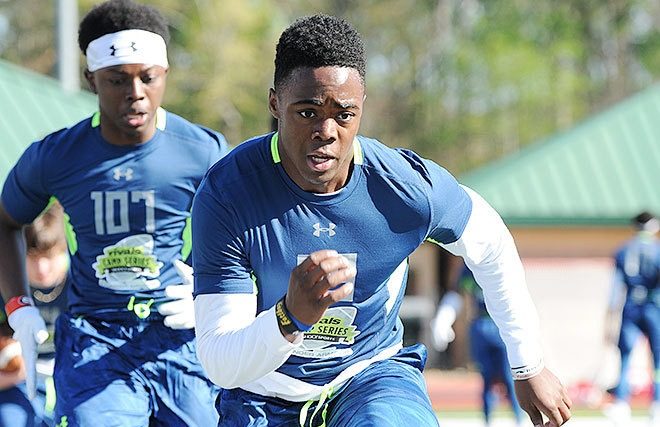 Other Notable Offers: Wallace committed to Notre Dame back in January, removing most, if not all, doubt from his recruitment. The likes of Stanford, Penn State and Tennessee wanted him to reconsider, but Wallace never wavered.

Quick Take: Wallace’s recruiting rankings are a bit up-and-down, which often points to a good amount of raw talent and subsequent questions about fine-tuning that potential. That is too much a reward not to risk.

Short-Term Roster Outlook: Notre Dame has invested in cornerback recruiting the last two cycles, in part because of a debacle at the position in the 2016 cycle and in part because the Irish do not have immediate answers ready after the 2019 season. That fact alone could put some inexperienced players on the field, a la Houston Griffith and TaRiq Bracy this past season.

Long-View Depth Chart Impact: The Irish need at least three cornerbacks ready at all times. Exiting 2019, they may not have any. If Wallace is not in the rotation by 2020, it will not be for a lack of opportunity.

And in our corner, KJ Wallace, an explosive football player with dynamic speed.