Julian Love will not return to Notre Dame for his senior season. The consensus first-team All-American announced Friday afternoon he will enter the NFL draft this spring.

“First off I want to say that this season was such a fun ride,” Love wrote on Twitter. “The relationships gained have made me so happy and I’m grateful to have been a part of it all. With that being said, my family and I’ve decided that I’ll declare for the upcoming NFL draft.

“While I’m confident that this is the best choice for my future, the decision to leave Notre Dame was not an easy one. It was a childhood dream of mine to put on the gold helmet and play football for the Fighting Irish, and my experience at this university has been just that — a dream.”

Love reportedly received a second-round evaluation from the NFL’s advisory committee. A Thorpe Award finalist as one of the country’s three best cornerbacks, it would be a surprise to see him fall any further than the second day of the draft. 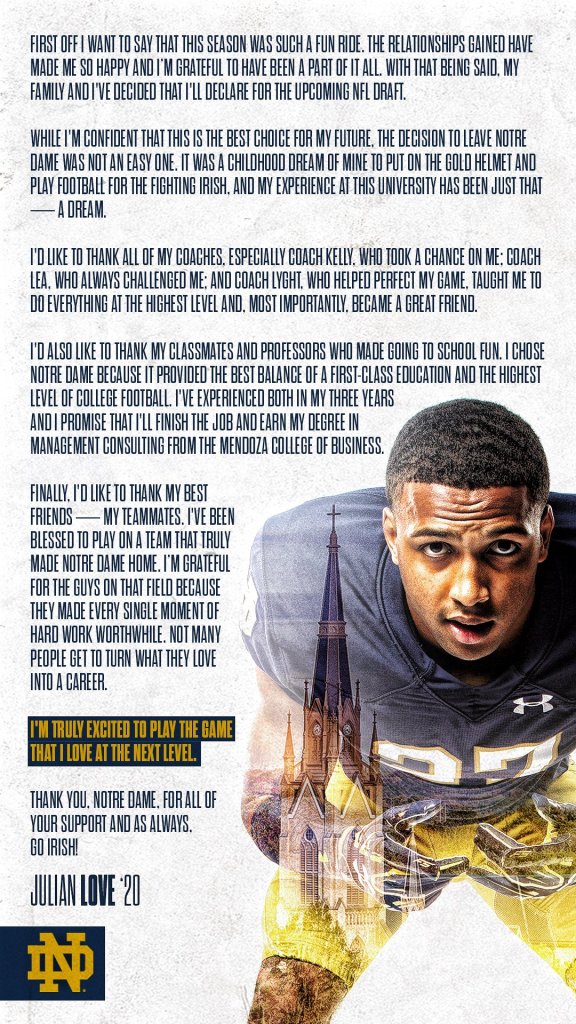 Two tackles in the Cotton Bowl brought Love’s season total to 63 and career total to 176. He managed only one pass breakup against Clemson — bringing his school record to 39 in his career — a number depleted by missing the entire second quarter, when the Tigers took advantage of his absence with three touchdowns exploiting his replacement coverage.

Given his prolific performance the last two seasons, Love’s departure comes as a surprise only in light of his comments since the 30-3 Playoff semifinal loss.

“It’s been a dream this year,” Love said afterward. “It’s been so fun, and we wish we could keep going and, obviously, end it on a better note. But there’s more to come next year.”

Love finishes his Irish career with three defensive touchdowns, including a 42-yard fumble return against Virginia Tech this season, and five interceptions.

Without Love, Notre Dame relied on junior Donte Vaughn. Despite his poor showing against Clemson, Vaughn figures to be in the mix to replace Love, along with current senior cornerback Shaun Crawford (coming off an ACL tear in August) and current freshman TaRiq Bracy. Whoever places a hold on the position will start opposite two-year starter Troy Pride.

This brings the current scholarship count to 89, with two more recruits signing in February yet a possibility. That figure will need to be down to 85 before the Irish open the 2019 season.